Home » About the Firm

Marc A. Lario and Associates is successor in interest in a long line of lawyers in the Lario family dating back to when Marc’s uncle, Frank M. Lario, Sr. began practicing law in 1930. Following in his brother’s footsteps, Marc’s father, Anthony M. Lario, began practicing law in 1946 and continued until his appointment to the bench in Camden County as a State of New Jersey Superior Court Judge. Judge Anthony M. Lario served in both the tax and probate court during his term of approximately 20 years. Although retired in 1992, Judge Lario continues to assist the law firm as of-counsel today, providing valuable services as a retired judge of the probate court and expertise in this area of law. It was Judge Lario’s background and Marc’s subsequent experience in the area of probate law that led Marc to his practice areas today. 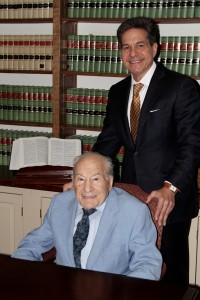